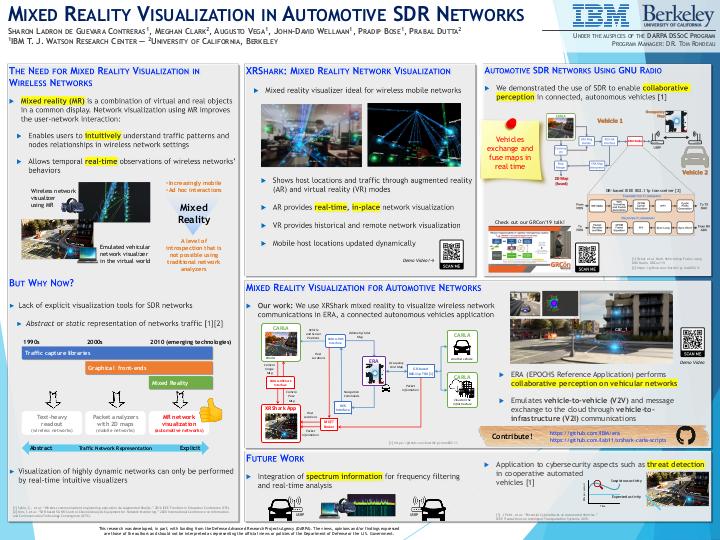 Intelligent edge systems constitute a key growth segment within the cloud-backed cognitive IoT marketplace. In this context, connected autonomous and semi-autonomous vehicles constitute one of the most prominent examples, where cars communicate with each other and with the infrastructure through vehicular ad hoc networks (VANETs). The dynamic (ad hoc) nature of VANETs along with the strict performance and security requirements of vehicle-to-vehicle (V2V) and vehicle-to-infrastructure (V2I) communications create unprecedented challenges in terms of visualization, analysis and introspection of wireless vehicular networks. Traditional graph-based network analysis tools with graphical user interfaces fall short of the capabilities needed to capture the behavior of vehicular networks with enough precision and timeliness.

In this work, we propose and evaluate the use of mixed (virtual and augmented) reality to support visualization of wireless software-defined-radio (SDR) networks in automotive applications. Specifically, we build upon XRShark, a mixed reality network introspection platform, to enable real-time visualization of V2V and V2I interactions within a connected car application called ERA. The latter is an open-source workload that drives the IBM-led EPOCHS project under the DARPA-sponsored Domain-Specific System on Chip (DSSoC) program [1]. Through this approach, we unveil more intuitive vehicular network analysis (not possible using state-of-the-art tools) while we open up opportunities for spectrum analysis and threat detection. 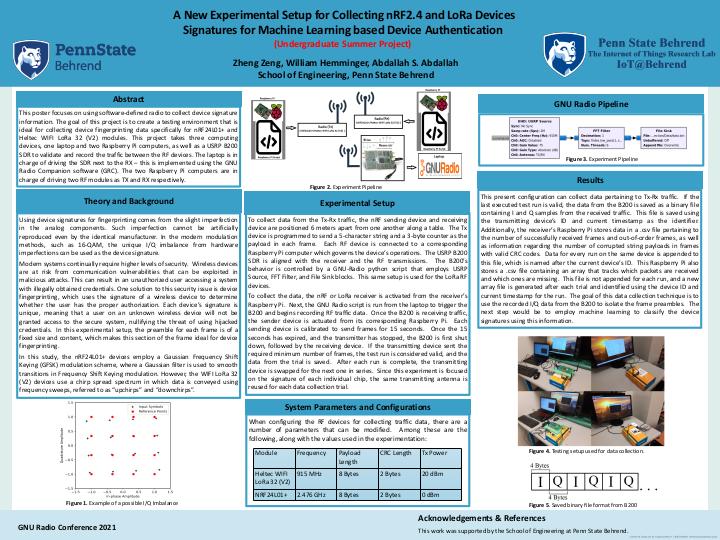 This poster focuses on using software-defined radio to collect device signature information. The goal of this project is to create a testing environment that is ideal for collecting device fingerprinting data specifically for nRF24L01+ and Heltec WIFI LoRa 32 (V2) modules. This project takes three computing devices, one laptop and two Raspberry Pi computers, as well as a USRP B200 SDR to validate and record the traffic between the RF devices. The laptop is in charge of driving the SDR next to the RX – this is implemented using the GNU Radio Companion software (GRC). The two Raspberry Pi computers are in charge of driving two RF modules as TX and RX respectively.